This is the OVW Report for Wednesday, November 16, 2016. This episode can be seen on WBNA-21 in the Louisville area on Saturday at 11AM and 10PM, and online on Monday at www.ovwrestling.com/tv. In this episode, OVW goes Hi-Def! Rocco Bellagio defends the OVW Heavyweight Title against Randy Royal, Rebel defends the OVW Women's Title against ODB, The Legacy of Brutality defends the OVW Southern Tag Team Titles against Pope Elijah Burke & Big Jon, a 6-man scramble ladder match, a tables match, plus more! 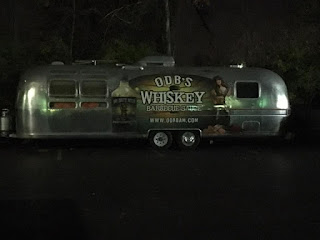 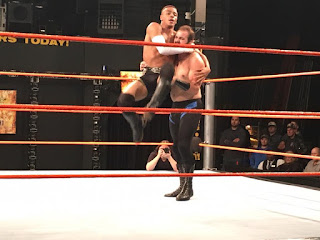 Brother Reed defeats Adam Slade. Reed hits a standing moonsault for 2. Slade catches Reed with a spinebuster for 2. Then Reed comes back and hits a running knee to get the 3.


That concludes tonight's pre-show dark matches. I always recommend watching the episode first on TV or online before reading the rest of the report. Again, you can check it out on WBNA ion-21 in the Louisville area Saturdays at 11AM and 10PM (check local listings) and on OVW's official website Mondays at www.ovwrestling.com/tv.


Gilbert Corsey, Ron Hed, & Shannon the Dude are on commentary and Ron is the ring announcer. 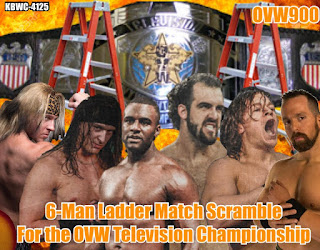 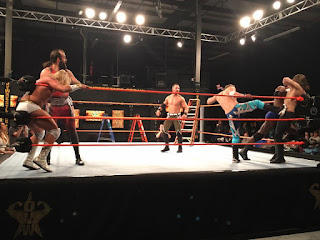 A lot of carnage with the ladders. Steele takes Diamond & Walker out with a ladder over the top rope and Diamond gets his foot/ankle caught up in the ladder as they hit the floor. Matrix flies out on all of them. Later on in the match, Gunn locks Matrix's and Walker's legs through a ladder and does the YTO with the ladder. In the end, Matrix has a free shot up the ladder and even though Walker tries to stop him, Matrix brings the title down and grabs it for the win! 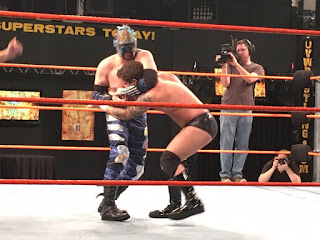 The Metal Master defeats Carlos Gabriel. A pretty quick squash for the returning Metal Master, who gets a tapout win via STF. 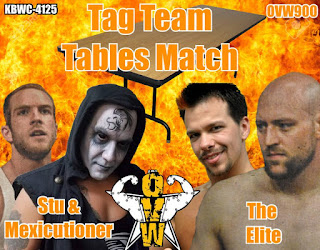 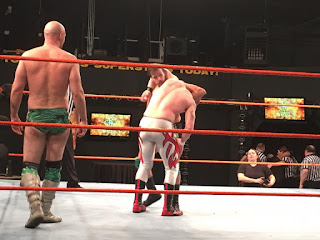 Stu & Mex come out on fire and get Ted set up on a table. Stu goes up top, but Adam pushes him off and Stu hurts his knee. Adam & Ted double-team Mex, get him on a table, and Adam jumps off the top rope and splashes Mex through a table to eliminate him. Ted & Adam double-team Stu, but Stu fires back and Adam accidentally almost flips Ted to the outside through a table. Ted lands on the apron, but Stu dropkicks Adam into Ted through the table to eliminate him. Brittany Devore comes out to check on Ted and yells at Stu about what he did. Stu goes back to fighting with Adam and they are both perched on the top rope. Stu looks like he is ready to suplex Adam through a table, but Brittany runs back out yelling at Stu and then throws powder in his eyes. Adam shoves Stu off the top and through the table for the win. 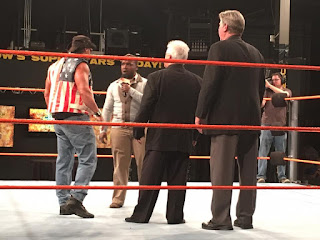 Dean Hill comes out and calls out the founder of OVW, Danny Davis. Instead, he gets the "Iron Man" Rob Conway. Rob says he couldn't not be at the 900th episode of OVW. He wouldn't have gotten to where he is if not for Danny Davis, so he helps introduce him. Danny comes to the ring and fans chant "Thank You Danny", but Danny turns it around and says thanks to the fans. He says he truly means it when he says that Louisville has the best wrestling fans. He gets interrupted by Stephon Smith. Stephon gets in Danny & Dean's faces, saying you can't have a 900th episode and not invite him. He blames both of them for being held back when he was here, and says he should be their prime time champion. Conway steps between them, and Stephon shoves him. Conway hits him and delivers the Ego Trip. 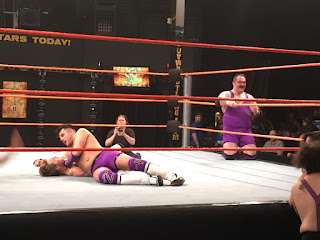 "The Van Zandt Family Circus": Dapper Dan Van Zandt, Scarlet, Ringmaster & Little Damion defeat Billy O, Callie, Jade Dawson, & Kevin Giza. Scarlet attacks Callie and Billy & Dan try to separate them on the outside. Damion flies out on them, Jade flies out on all of them, then Ringmaster leaps on all of them. Giza sets up to do the same, but Dan gets in and cuts him off with a hard clothesline. He hits the Death Valley Driver, and Ringmaster gets up and hits the flying elbow for the 3. After the match, Giza's partner Lucas Jacobs comes out to check on him. Damion hits him with an eat de-feet, then him & Ringmaster place Jacobs on the top rope where Dan hits a super Death Valley Driver. 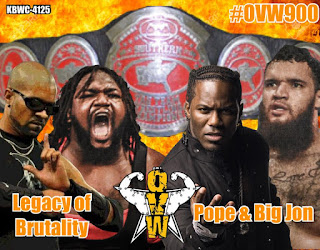 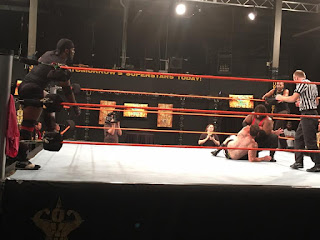 Jon fires away and knocks everyone out of the ring before Pope even turns around to fight. Jon is in control until interference by Ca$h & Josh causes the L.O.B to take the upperhand. They focus on Jon's left arm. Jon finally gets a hot tag to Pope. Pope comes in with bionic elbows galore. Josh gets on the apron, but Pope gives him an elbow. Ca$h gets in and grabs Pope from behind, but Pope kicks him below the belt. Jon is back in and spears Zo out of the ring. Jon gets back in and with Pope, they hit the Doomsday Device and Pope gets the 3! 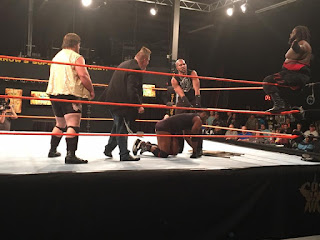 After the match, Ca$h attacks them with a chair. Jon gets knocked out of the ring and the Legacy triple teams Pope. Hy Zaya sets up a piledriver and Zo jumps off the ropes to spike Pope onto a chair! Pope has to be stretchered out. 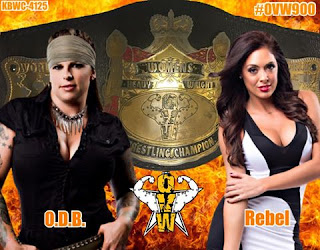 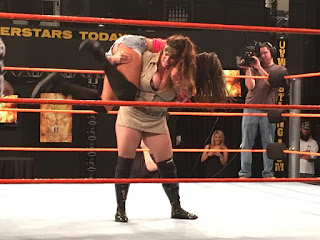 A good match, but Rebel takes ODB down and hits the split-legged leg drop for the 3. During the match, Madi Maxx was at ringside on her phone watching the action. 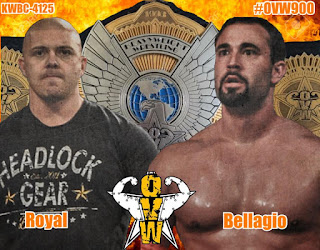 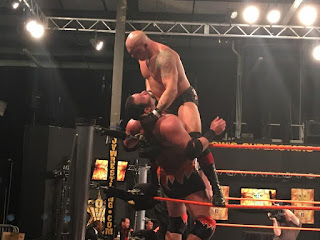 A very good match. Royal pulls out all the stops, but can't put Rocco away. He hits a missile dropkick, the reverse Russian leg sweep, but Rocco kicks out. Royal gets caught with a Plunge, but kicks out at 2! Rocco gets frustrated with referee Joe Wheeler, and Joe takes the Plunge! While this is going on, Royal pulls a chain out of his kneepad. He clocks Rocco and AJ Lucio comes out to count to 3! 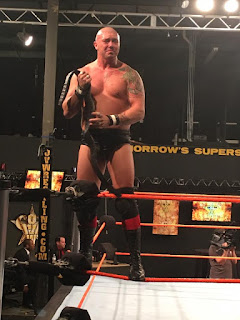 Royal celebrates with the title as Big Jon, Tyler Matrix, & Deonta Davis all come out to celebrate with him. However, when AJ is checking on Joe, Joe pulls the title away and hands it back to Rocco! Joe disqualifies Rocco for plunging him, so Royal wins, but Rocco remains champion! Randy gets "Royal-ly" screwed!

NONE TONIGHT DUE TO THE EXTENDED TV TAPING.

As always, thanks for reading!
Posted by OVWmania Brian Cannon at 11:13 PM 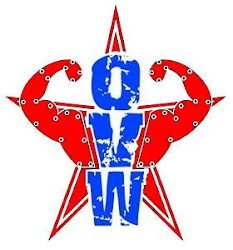